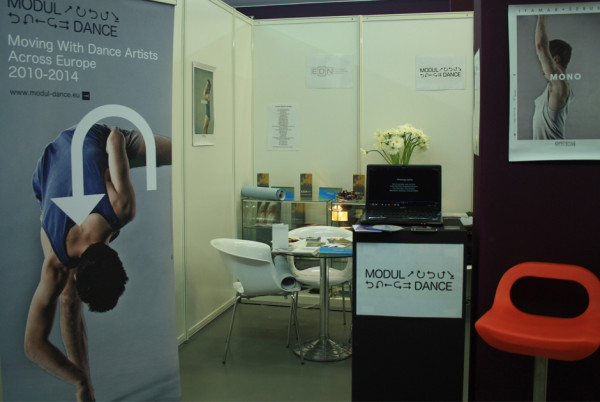 The presence of modul-dance at the Internationale Tanzmesse NRW provided an exceptional opportunity to make contact with professionals from the sector and acquaint the international dance community with the project.

Every two years, Düsseldorf becomes an important meeting place for dancers, choreographers, agents, companies, theatres, festivals and other initiatives whose goal is to support the creation and dissemination of dance.

For the first time, modul-dance has been part of this exciting showcase, which took place from August 29 to September 1 at the NRW-Forum Kultur und Wirtschaft in Düsseldorf.

The project shared an exhibition space with the European Dancehouse Network (EDN) on this sixth occasion of the fair, which brought together 130 initiatives from the world of dance. During the three-day exhibition, over 1500 people from 50 countries visited the various stands at the fair, which registered a 40% increase in activity in 2012.

Modul-dance aroused great interest among the visitors, who remarked on the importance of cooperation among the European dancehouses and the great opportunity it represents for the artists chosen to participate.

As well as being a venue for the exchange of ideas and a market of shows, the Tanzmesse is also a festival, where the artistic proposals of sixty companies were presented. Modul-dance figured in the programming with the participation of several of its selected artists. The Irish dancer Liz Roche presented Fast Portraits. Other modul-dance pieces were Pave Up Paradise – choreographed by Ben Duke and created jointly with Raquel Meseguer – and a Göteborg Ballet choreography by Gunilla Heilborn titled Alaska. Morau Marcos and La Veronal performed on the Tanzhaus stage with the piece Moscow, and Tina Tarpgaard also appeared on the same stage with Frost. Finally, Björn Säfsten, guest artist on the Carte Blanche programme, participated in the Open Studios informal artistic encounters with Display/Introduction.