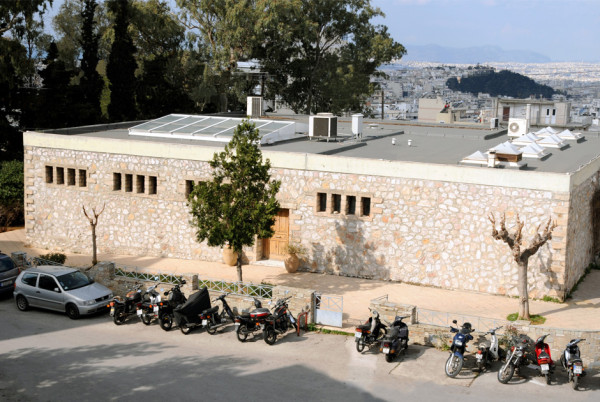 Without a compass
In 1903 the Duncan family arrived in Athens, where they resolved to remain and there establish a place for dance to be experienced in a fluid relationship with everyday living. Modeled on the Temple of Agamemnon their rough stone structure represents the first attempt to build a space specifically for modern dance and is today a small scale dance house, a centre for contemporary choreographic research in the Duncans’(Isadora and Raymond Duncan) name, under the auspices of the City of Byron.

The house’s policy for the last 12 years always balanced between the two poles dictated by the site’s historic and architectural identity: on one side a focus on anthropocentric and site sensitive works and on the other side an openness to the plurality of the new tendencies in contemporary dance as well as a support of young artists at the moment where they seek to define and articulate their personal idiom.

From 2006 the collaboration and exchange with its international partners (EDN, modul-dance project) permits the Center to further enhancing and developing choreographic creation and mobility.

This momentum is being stopped and the landscape has radically changed under the current deep, long-lasting crisis: art is faced as a luxury and ministers argue for the freezing of funding saying that art is in no way a “social commodity”. Of course, artists are still creating, new currents of creation emerge- low or no budget creations – since public funding is completely frozen for the last two years and private one tends also to disappear. The sense of supporting each other emerges, and art workers come together in larger collaborations, partnerships, collectivities. But everything is floating in a blurred reality, too fleeting to be registered, analyzed and inspiring for new ideas or directions. To be aware is to listen, to learn from, to absorb. These times we experience this fugitive, vulnerable (being at the edge of loss) quality of performance art going through the political, economical, social spine of the country, of our art domain. It is as if we navigated without compass.

I think it is the moment we have to be more than ever sensible to the artists’ needs. And modul-dance program is a precious oasis as, at a moment when NO artistic company or organization receives ANY fund- we can nevertheless give support to the “extraversion” of Greek modern dance, giving the possibility to some artists to circulate and present their work in other European countries, get to know other artists, institution frames and audiences across Europe. Modul-dance program was the unique action -apart the modern dance platform- that had the approval for a support by the Ministry of Culture , even if we have not received it yet…

Secondly, as reaction to what is happening, I would like to focus more in the immediate future on educational programs, since I strongly believe that education is a way of strengthening the resistance to the loss of belief in deep humanistic and democratic values, one of the main victims of which , I consider, is art. Last, but not least, to bring dance art more closely to the public arena, so that is becoming more involved with the cultural life of the community.

It’s about going on experimental journeys. Dancing with Strangers might be a good place to start. IN Greece of 2012…