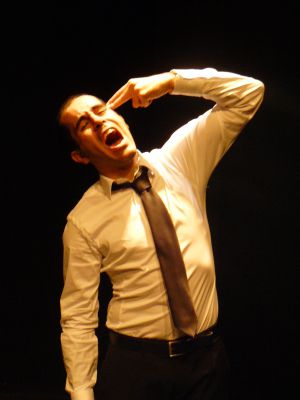 The modul-dance selected artist Daniel Abreu has received the Spanish National Dance Award for “for his personal language and the creation of a particular universe supported by an original, innovative and risky code”. He was selected in 2010 for the project to develop the piece Animal.

Daniel Abreu was born in Tenerife, which is where his curiosity and interest for physical movement and stage expression began. He obtained a degree in Psychology from the Universidad de Educación a Distancia. As a performer, he has worked in a variety of national dance and theatre companies and groups in Spain. He has received a number of prizes, such as the Jury’s prize for Choreography in the XVIII Certamen coreográfico de Madrid, the outstanding Dancer’s AISGE Foundation Prize to attend the American Dance Festival (2005) in the XVIII Certamen coreográfico de Madrid and the Most Distinguished Dancer of the IV Certamen Coreográfico de Maspalomas (1999). His project of forming a company developed almost imperceptibly in 2004. The sum of his creations and collaborations came together in the concept that is known today as the Daniel Abreu Company. His first solo piece, Espera, marked the beginning of this ongoing creative career which has resulted in more than forty works. As a result of all this creative work, Daniel Abreu has been invited to give a number of workshops and courses, in which he has shared his creative and personal vision of contemporary dance with students as well as dance and theatre companies in Europe and America. In parallel, he continues developing his own work without moving away from other creative activities, such as directing projects for other creators. He combines this with stage directing of Provisional Danza (Madrid). Daniel has created works for Teatr Tanca Zawirowania, Companía Nomadas and Proyecto Titoyaya.