In Encore, Eugénie Rebetez embodies a diva, an enchantingly eccentric and voluptuous figure in the skin-tight small black dress, from head to toe tuned in to sensuality. She whirls across the stage, filled with the glowing desire one day to play in the big show circus. She takes every freedom – also the freedom to fail. She does this with the most extreme physical commitment and devastating charm.

Encore is a tragicomic one-woman-show in which the Swiss dancer and choreographer merges song, dance and comedy into a distinctive stage language. Whenever I stand on stage it feels as if I am putting my life on the line. I am a thoroughly honest liar and love getting people to dream. I want to appear in the famous Olympia in Paris – and in Las Vegas, with Céline Dion as the support act. Eugénie Rebetez swims against the stream of current trends and goes her own way : unswervingly, funny and cheeky.

Eugénie Rebetez (*1984) grew up in the Swiss Jura countryside. She studied at the ArtEZ Institute of the Arts in Arnhem, Holland, obtaining a degree in dance and choreography in 2005. She went on to work with, notably, David Zambrano in Brussels and Amsterdam, and Zimmerman & de Perrot in Zurich. In 2008, she settled in Switzerland. She has since created two solo shows : Gina (2010) and Encore (2013). Her second work was created within the modul-dance project, as she has been selected to become a modul-dance artist in 2011. Eugénie Rebetez lives and works in Zurich. 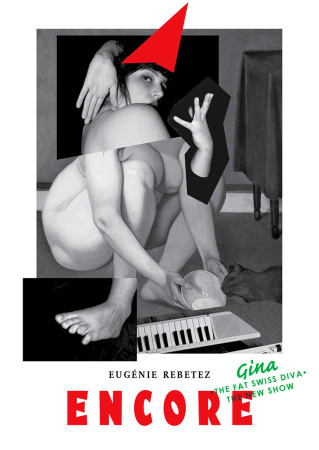