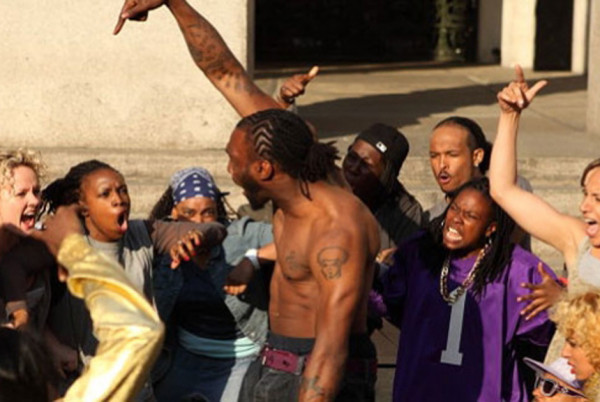 Dancefilm program curated by Núria Font/NU2s projected at Mercat de les Flors in the context of the fourth edition of IDN, a biennial festival focused on showing different ways to build a dialogue between dance, image in motion and digital tools. Films projected:

The body builds, together with the landscape and its elements, a choreography connected to nature.

Amandi is an amalgam made of nature, forests and strange landscapes. Amandi are two characters who pass through this particular area and that, along different paths, take us into a constantly changing world.

Meditative and austere, Constructs reveals the meeting, and parting, of two figures along a train track on a cold winter morning.

A collaboration with renowned choreographer Filip Van Huffel of Retina Dance, Concurrence is a short dance film that explores choreographic connections in a series of disparate performances. Shot on location at Stafford Castle, the film was commissioned by Dance Connected as part of their artistic development programme linked to their cultural Olympiad project Get Dancing.

Set in the dramatic West Highlands of Scotland, Away From Here examines the fleeting relationship of people to a sense of place and belonging; exploring the incongruity of our relationship to an ancient landscape. A collaboration between highly acclaimed dance company plan B and multi-award winning Goat Media, the project was filmed in HD, entirely on location with an international cast and crew in August 2011.

The film follows the construction, eruption, corruption and destruction of the masculine self and other. It investigates the boundaries of masculinity, and the forces that operate on the male body, while borrowing from different cultures and modalities. The movement language can be traced to traditional forms and concepts integral to martial arts. It translates it into a contemporary individualized expression in different ways, while counterbalancing it with the mundane “every day” gestures of male bonding.

Just as the seed of a tree keeps its image inside until the appropriate conditions allow to show it, the soul contains the image of the personality, which manifests itself through action. Between men and trees there is a vital link that imperceptibly connects their destinies.

One line, two dots, and there it is: a human being.  Alone at first, wandering, wondering.  Then another line, another being, or is it just a reflection?

Photography is related to theater. The stage is the frame. The frozen pose of a dancer is similar to a photography frame. Abstraction, work with paper, synthesis of sound, picture and motion build the main character of that piece.

One Man Walking explores some of the intensity and challenges of life in the metropolis combining krump –an expressive and highly energetic dance movement– with the uplifting, soaring excitement of free-running.

Come see the world shows the plurality of Goteborgsoperans Danskompani, consisting of  dancers with sixteen different nationalities. The piece works as a mirror reflecting the city of Gotemburg and the globalized world in which we live. With music by Betancor, especially composed for the film, it takes the movement to the city, and frames it in original cityscapes. A global village come together with one goal: dance destination.

A dancer trapped in a street lamp finally falls down to the floor, where she realizes that she can’t move her legs any more. Beside her there is a strange glass vessel that contains colors in movement which will show her the way to reconquer space.

Los Camulcos Invisibles is a video-creation that, from an artistic perpective, attempts to show and get a glimpse at mental disability and all that it means in our societies. Presented as a mockumentary, playing with stereotypes and prejudices, this piece brings an affective, funny and honest look that aims to overcome them.

A transdisciplinary experiment that aims to create a new workflow out of two disciplines with their own methodologies: dance and drawing play here with improvisation and animation as communication channels, which result in this animated video-dance piece.

Elena Córdoba, dancer and coreographer, heard in Vivre sa vie, by Jean-Luc Godard a short dialogue in which two people discussed about the nature of chicken and their soul. From that text she took the idea of animating the body of a quail ready to be cooked and then, following Godard, look for the soul of this posthumous dancer.

“The moment you fell down was the moment when you questioned everything, it was time for your morning coffee.” A dialogue between music, dancers, camera and space.

Coup de Grâce is a film about the collapse of a friendship, about what is broken and what cannot break. After a long separation, two men meet again in a massive building in a remote location. In the course of the evening and along an icy night, they fight a weaponless, exhausting duel.

A teenage marching band rehearses on a rooftop car park on a Saturday. A flock of crows lie dead in the wind. Three people sit in the back of a car waiting to move. Motion Sickness is a dance-film exploring ideas of need, rejection and escape.

2 sisters. 2 variations. Together, 195 years of experiences.

Action, conduct, way of being, condition or state of mind. Turn around, twist, roll up.

Flamenco dance fusion with contemporary music recorded in several public spaces in Barcelona. From the combination of different styles and languages ​​(movement, music, words, architecture), the film represents the struggle to assert onself in public space through one’s own desire and through the need to create.

Hong Kong is known for its high density concrete jungle rather than for its rich countryside.  The dance company t.r.a.n.s.i.t.s.c.a.p.e takes an interest in the territory’s environmental issue of over-urbanization while revealing both Hong Kong urban landscapes and natural environment as two dancers physically explore the radically opposite locations.

It gets to a point in which communication breaks down, and trying to jump that wall becomes impossible. Time heals the wounds, but the dust expands. We leave the meaning of these suggestions open to the viewer’s interpretation.

Noord is the place where everything can be seen. Where the outside world is reflected on windows.

Five people trapped in a room with no doors or windows and divided by a wall. Each one faces it differently, but they all share the same rules. El Mur is a film adaptation of the homonymous dance-work that the company El Mur Dansa premiered by the end of 2011.

A meeting of matter and energy – structure and process. Spoken poetry as viscera, arriving in space. The body articulating what it does not yet know.What happens in the threshold moment before gesture manifests itself in the material world?

The camera observes what lies ahead to deconstruct it into another “reality”.

The collision between a man and a woman gives birth to an aquatic confinement. The woman indulges in a subtle and gracious existence. The fusion with what nature awakes on her impels to develop in new worlds, worlds of hunger, survival, laxity; in the most sublime reality. A new life is generated; moves, breaths, flows in a place of embryonic echoes. The arousing of the touch at the earth’s material complexity obliges her to confront her own ephemeral condition and the destructive power of creation.  The man appears and disappears.

Beach Party Animal is a choreo-mentary of British eccentricity and Brighton beach life. Set over twenty-four hours, where the land meets the sea and people come to be and be seen, it is an artful and cunning mix of staged set-pieces and real-life action, and an homage to the city that never sleeps.

The dance and the city are the main characters of this production, filmed in four European cities: Barcelona (Spain), Malmö (Sweden), Swansea (UK) and Genoa (Italy). The film suggests a reflection on the similarities and differences of European social and public space through a poetic documentary that has dance as a leitmotif.

Forward Motion features over 20 historic, seminal and groundbreaking films along with interviews and insight into artistic practice. Forward Motion demonstrates the diversity of British screen dance, its inspirations and the influence it’s had around the world. It brings together well-known dance films and experimental rarities, provoking discussion and debate. The eclectic programme and the accompanying resources will appeal to a wide range of audiences, from those new to screen dance to those with an in-depth knowledge of the art form.

The British Council and South East Dance have worked with an expert committee to curate the programme.  The committee includes (with their occupation at the time of consultation):