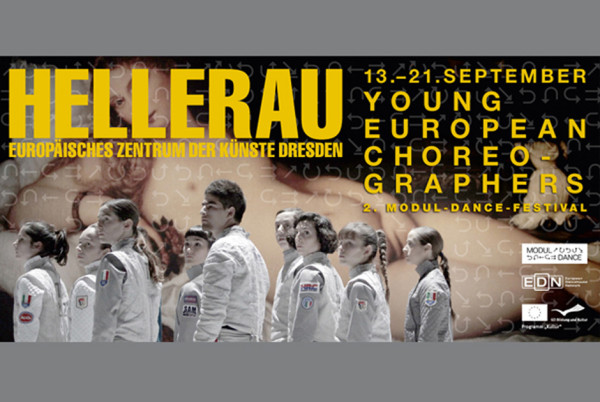 This is the second time that HELLERAU-European Center for the Arts will be putting on show the signature styles of up-and-coming European choreographers. The festival will be presenting both finished works and some which are still being created, with lectures, workshops and a wide range of films rounding off the programme.

A woman looks at a Titian painting. A man stands at the door watching the woman look at the paiting. Who sees whom? What is art and how do we look at art? Siena investigates the constant human need for self-observation.

Imagine a world in which every conflict is resolved as a duel; every argument is a matter of life and death; every presidential candidate puts their life at risk. In Duel, two dancers face one another and act out a series of confrontations.

The works of Marie-Caroline Hominal revolve around ideas of identity, transformation and anonymity. Her new project Froufrou investigates multiple identities and the question of how these identities are revealed and passed from one person to another.

The collective mind and body of the city provides the raw materials for the this work. Here, these elements have been re-evaluated so that the concept of wandering aimlessly in the streets (drifting) also applies to strangers, immigrants, people who travel for pleasure or because they have no other choice. This is a very physical dance, full of emotion.

Antje Pfundtner is a modul-dance artist. She will present a previous work, Tim Acy. Questions of identity are always a form of communitation to her. In this piece she looks into these questions with a good deal of self-irony, investigation the laws of communication.

What is the modern image of the relationship between dance technique and choreography, and how do we move through the process and result of choreographic work? Modul 6 is the name for the practical research series developed by the Swedish choreographer and dancer Rasmus Olme.

The Mozambican choreographer Panaibra Canda will be working with his four dancers and one musician at LAB@HELLERAU for one month. During the festival he will be giving a preview ot his new piece, due to premiere at HELLERAU in March 2014.