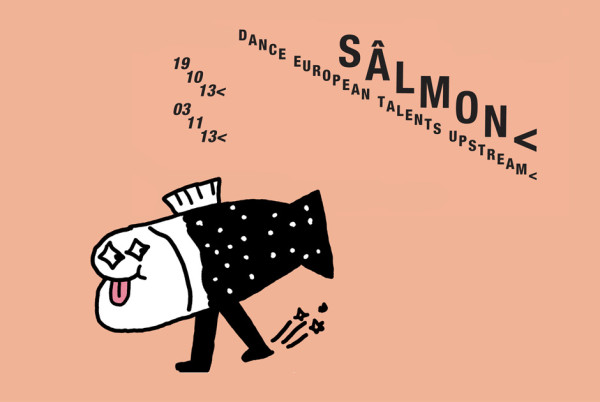 SÂLMON< is back for a second time. It remains committed to talent, to creators with new proposals, artists with fresh ideas, European, and sometimes going against the current. A look at local and international artists in the framework of the artistic residencies offered by El Graner centre for dance creation and the European modul-dance project. A busy programme of events lasting two weeks, with different formats and diverse approaches to the body and movement.

SÂLMON< aims to consolidate itself as a space that gives visibility to different ways of understanding choreography. SÂLMON< includes shows, laboratories for professionals, spaces for reflection and spaces for meetings with the public.

Drawing on contemporary methods of representation – cut-up techniques, choral scenes, beat-boxing and the postpunk diaspora – The Loose Collective proposes a physical and musical mise-en-scène with various elements from this extraordinary literary corpus, which today constitutes an expression of creativity and utopian ideals, human ambition and frustration.

This is a piece about the passing of time. It emerged from a reflection on the art of skilfully manipulating objects: juggling. The throwing of objects evokes the fragility of human existence. The idea is to strip away the stereotypes associated with this kind of circus in the collective imagination and explore it as a language.

Still is a changing proposal result of the meeting of Jurij Konjar with an artists in a given environment. On this occasion, the Slovenian dancer has worked for some weeks at Graner with Martin Kilvady in a research process about the present movement, mobility and immobility, from the observation of what happens when 2 artists come together to improvise. How do we observe change? How do we experience it? What constitutes a useful score? What directions dictate the space between two performers? What inspiration does a score offer two artists who are performing together for the first time? Can it be a meeting space? What kinds of dialogue may be observed in real time?

In her second show, Encore, the dancer and choreographer Eugénie Rebetez, aka Gina, again presents audiences with a one-woman-show. Oscillating between clownish laughter and the stark reality of a foundering diva, her brilliant sublimation of the genre translates into generous sensualism, powerful movement and a serious, even pathetic image of the human condition.

The collective mind and body of the city provides the raw materials for the this work. Here, these elements have been re-evaluated so that the concept of wandering aimlessly in the streets (drifting) also applies to strangers, immigrants, people who travel for pleasure or because they have no other choice. This is a very physical dance, full of emotion.

Thanks to a modul-dance Carte Blanche. These two performers have coincided on what they call “the middle ground”, at an interesting halfway point where they try to help each other capture the impossible, quantify the elusive, and resolve choreographic dilemmas and theoretical enigmas.

Thanks to a modul-dance Carte Blanche. Guy Nader and Mickael Marso explore risk and maximum physicality to create an axis of survival onstage. A mixture of styles ranging from bboying to contemporary dance dominate this energetic, refreshing proposal.

Thanks to a modul-dance Carte Blanche. This piece by García Ferro speaks of the continuous unfolding of each being and each of his steps, the conversion of each real body into the multiplicity of the representational body. And the need to make the real body coexist with the apparent body is also explored.

The meeting between the two best-known Catalan artists on the current international scene, Marcos Morau (modul-dance selected artist) and Lali Ayguadé, has resulted in Portland, a show forming part of a series of small-format pieces, solos and duets, which reproduce the American landscape.

When the revolution in Tunisia started, Hafiz Dhaou and Aïcha M’Barek travelled to Beirut to work on a piece. Dhaou pushes himself to his limits in this poetical and emotional explosion, the result of the storm unleashed inside the dancer as a result of the Arab Spring. Cie. Chatha is a modul-dance selected company.

Stuntman is a reflection on mutable identity of the human being and his need to be reflected in the eyes of others. A free fall in a subtle emotional line that separate fiction from reality, where life has value and meaning only in the action.

Symon Pédícrí is not a typical ventriloquist show. Symon Pédícrí: self-taught surgeon of enormous talent, heir to the scientific legacy of the Pédícrí (former horse breeders), who wanted to go a step further by creating a new being that would surpass his own image and likeness, born nine months, nine days and 16 hours after the death of another Symon Pédícrí – his brother and namesake, whose shadow he fights all his life, knowing that his other self had to die so that his parents could conceive him.

Excerpt from a longer piece bearing the same name. It is the fifth partnership between Guy Nader and Maria Campos. The show is a physical exercise in sound and vision, which explores space as if it was a score of sound and movement, bridging the visual and what is perceived. Zenith looks at the value and the meaning of time in our modern society.

A two-days seminars conducted by Cristina Farinha adressed to managers, producers, distributors and artists working on the performing arts sector and to all those interested in the artists’ mobility in a European context. Seminar in English.

Addressed to professional dancers and advanced dance students. Both artists will be in residency at Graner in October. After a collision of two universes that are so close they are almost entirely different, this laboratory will be about what they met.